OMG(osh)! I am so thriled and honored to have Brenda Whiteside on the ranch today! I have been staring at this book cover for weeks hoping I can win it (vs buying it which has no fun of chance but may be my only avenue if I want to read this book-and I do) and read this book! But seriously… LOOK at this cover! Doesn’t it make you want to read her book? So, I’m going to give Brenda free rein on the ranch today while I cuddle my mocha and enjoy her visit. I’m pleased you’re here too.

Take it away, Brenda!

Thank you for joining me today. My name is Brenda Whiteside and I write romance and women’s fiction. I’ll be drawing for the winner of an ebook of Honey On White Bread. Don’t forget to leave your email address in your comment.

Mine’s calisa(dot)rhose…oh, you mean our guests… sorry. So everyone else leave your emails! Proceed sweetie. 🙂

What fantasies did you have as a child that you carried forward into adulthood? Hopefully, you haven’t grown up while you’ve been growing older. 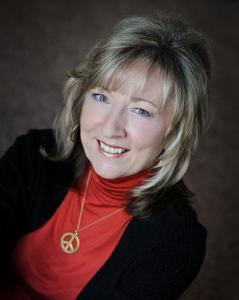 As a child, I was prone to fantasy – not necessarily the stuff of magic but the stuff of romance. I can blame much of my imagination on black and white movies of the 1930’s and1940’s. During the hot afternoons in Phoenix, Mom would draw the living room drapes and turn on The Channel Five Movie Matinee which ran the old black and white movies from her teenage years. On Saturday mornings we’d watch The Shirley Temple Hour. My mother loved to sing. She could sing all the songs from the movies and taught them to her two daughters.

Movies were set on sound stages mostly and they didn’t worry about too much realism. My heart pattered over Gene Kelly dancing in the rain, Fred Astaire and Ginger Rogers dancing around a perfect garden under perfectly spaced stars and Dorothy dancing through the Land of Oz.

As a result of my starry-eyed fascination with that era, the book of my heart is a novel set in 1945. Writing Honey On White Bread let me submerge myself into those magical, romantic movies and in a time that seems simpler by today’s standards. My heroine, Claire Flanagan, is caught up in that fantasy called Hollywood. She loves those old black and white movies as much as I did. Of course, for her they’re not old. Her hero, Benjamin Russell, in her eyes, is as dashing as any movie star idol. But it wasn’t all bliss and glitz.

When seventeen-year-old Claire Flanagan is wrenched from her father and deposited at the Good Shepherd’s Home for Wayward Girls, all dreams for Hollywood stardom are lost. But when twenty-year-old Benjamin Russell helps secure her release, she starts to believe in a happy future with him…until she discovers his ex-girlfriend is pregnant.

In this post WWII coming of age novel, Claire discovers the silver screen can’t compare with the fight she takes on for the leading role in her own life.

If you romanticize days gone by like I do, I’d like to give you an ebook of Honey On White Bread. Leave me a comment and your email address and I’ll draw for the winner.

I do and this blurb is fantastic! Even more, you have an excerpt for us. 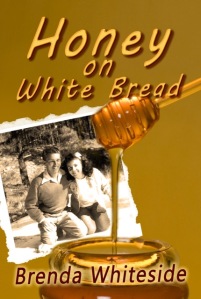 “I’ve never snuck into a theater before. Sneaking into a dark theater with Arnold …” Paulie laughed. “Are you sure this isn’t supposed to be a date?” Paulie appeared at once timid and suspicious.

“You know, Paulie, Arnold is a dear friend …”

“Okay, okay, a special friend. We haven’t made any promises to each other or anything. He’s cute, he’s fun … but …”

“Oh, I don’t know.” A hint of guilt over the difference between how I felt about Arnold compared to how he felt about me passed like the breeze drifting over the porch boards. His were childish whims of infatuation, pushy, uninvited. “It’s kind of hard to explain…” I toyed with the folds of my skirt. If most of the girls at North High were stuck on Arnold, a great catch I didn’t appreciate, then I wished my best friend could change places with me. If only …

“Hey, ladies.” The blur of a male figure in jeans had ascended the porch steps, not pausing to pass pleasantries.

He opened the screen door and stepped into the house. Benjamin. My second encounter brought on an unexplained reaction; my heart pattered even though I’d barely caught a glimpse.

Her words stopped him. “Little bit.” He paused behind the screen door.

He tipped his head to me. “Nice to meet you, Claire.” He continued on into the house.

“Same here,” I muttered as the screen door shut.

“Now, where were we?” Paulie put a finger to her mouth.

I looped an arm through my friend’s. “We were going to see if your momma could use some help. Come on.” I pulled her from the seat. “Let’s help then freshen up before dinner.”

We let the screen door slam behind us and turned into the kitchen in time to see Benjamin lift his mother from the floor and spin around twice.

“You stop that, Benjamin Willis. Man or no, I can take a hand to your hide, if I need to.” Her hands flailed gently at his chest.

He laughed as he set her down, steadying her before letting go. Taut muscles on the back of his arms flexed with the effort; his deep laugh filled the kitchen. I couldn’t help being drawn into this entirely pleasant scene, comical and radiating warmth, inviting me to take part in their joy. His mother snatched a dishtowel from the counter and swiped at his legs.

“Hold off now. I give, I give.” He withdrew what appeared to be a check from his back pocket.

Mrs. Russell accepted the paper without comment and stuffed it into the frayed pocket of her red checked apron. He kissed her on the forehead, took the bottle of beer she offered him, and leaving the kitchen, nodded in my direction.

I sniffed the sweat of hard work and the yeasty smell of beer as he passed by. My head reeled for a moment with the warmth of the kitchen and the people within, combined with the essence of what I labeled man.

And her other newest releases are available if you can’t get enough of Brenda’s voice!

Convinced she was born to be an artist, Brenda never took her love of writing seriously. One day, sometime after college, marriage to a man doing a stint in the army and the birth of her son, she discovered she gained more satisfaction by filling a blank page with words than an empty canvas with color. She left her paints behind. After publishing several short stories, she turned to writing novels. Regardless of the length of her story, the characters drive her forward, taking her on their journey of discovery and love.

Brenda and her husband are gypsies at heart currently making Minnesota their home and sharing it with their dog, Rusty. True to their nature, they’re planning to move once again in 2012 to Northern Arizona. When she’s not at her laptop writing, she enjoys hiking, motorcycle riding and the company of good friends.

She blogs on the 9th and 24th of every month at http://rosesofprose.blogspot.com

She blogs occasionally on her personal blog http://brendawhiteside.blogspot.com/

What a super excerpt, Brenda. Thank you for sharing and hanging on the ranch with us today! Remember- emails in your comments! And Brenda will contact the winner!