Oh my goodness! I’m so very excited to have on the Ranch today, the first MAN to join me in the Round Pen! No kidding! I’ve been waiting for this day for nearly a year and it’s here. Many may have heard in the past, my fellow Rose, Vonnie Davis, speak so lovingly of her husband, but how many know he is also an author in his own right? Please, give a huge Ranch welcome to my distinguished guest, Calvin Davis!

Calisa, thanks for inviting me to your blog. From what Vonnie has shared, you romance writers are a close-knit group, so I feel honored you’ve asked me to talk to your readers today.

We may be close-knit, Calvin- but I’m proud to say we’re also a diverse and open-minded group of writers anxious to get to know you better. Let’s get started.

Vonnie has mentioned the two of you met online. Is that right?

Yes. We met on one of those dating sites. I can’t recall the name of it; you’d have to ask her. She keeps track of all that stuff. I was impressed by a couple stanzas of poetry she’d put in her profile. She also mentioned she’d majored in English and loved books, which sparked my interest. Although I must say I think it was her love of Shakespeare that prompted me to contact her. You can’t teach English for 40 years and not love Billy, the Bard.

Billy… this is where I admit I don’t know a lot about Shakespearean works. *hangs head in shame* What’s your favorite work by Shakespeare?

Without a doubt, Macbeth. It’s a play about the human condition and all our foibles. Murder, mayhem and witches, what’s not to like?

Exactly! I’ve been writing in one form or another since childhood. It’s in my blood. After all, my mother named me after a location in a romance novel! Or she tried to- but that’s another blog post. How long have you been writing, Calvin?

All my life, just like you. Everything that happens to us and every person we meet adds something to our author’s voice. We are a compilation of our experiences when we pen a story. I might not write about my mother, but her love and strength sings out in words I write. My faith also factors in, as does my love of music and laughter.

I had a wonderful experience back in 1968. I took a year sabbatical from teaching and moved to Paris for a year on the Left Bank in a studio apartment at 21 rue Galande.

Every day I wrote at sidewalk cafés while I absorbed French culture and lived off espressos. The memories I have of that time are cherished. I scribbled a couple books while there, writing the hard way: Pencil to paper.

What a wonderful experience! And you returned with Vonnie and got this current photo. Awesome! That location I mentioned my mother naming me after is in France! It’s like we’re connected! 🙂 (Sorry, I love that commercial) Why Paris? Why not London or Rome…or Athens?

I served in the Army between earning my bachelors and Masters. One of the places I was stationed was Germany. I took a 3-day pass and traveled to London and Paris. I fell in love that weekend with the City of Light, a place of ideas and literature and art. It was the first place I, as a black man, felt free. I could look a white person in the eyes there and not fear recriminations. I could sit in a café next to a white person. I could use the front doors of establishments. Of course that was back in the late-fifties. The world has changed much since then, but not my love for Paris. I like to say my soul came alive in Paris, and my heart came alive when I met Vonnie. 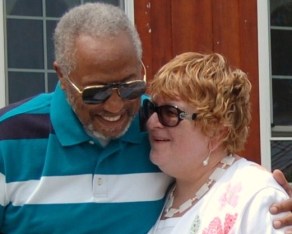 How did you get the idea for The Phantom Lady of Paris?

Actually, a thief gave me the idea for The Lady, as I call her. You see, every morning, I’d shower, dress, sprint down 4 flights of steps and up the street to the neighborhood boulangerie (bakery) for a few croissants and then across the street to the cremerie (dairy) for fresh yogurt. I’d slip into the foyer of my building to get my copy of a London newspaper from the mailbox and head to my favorite writing café with my writing supplies, croissants, yogurt and newspaper, eager to start my day.

One morning, someone took my newspaper, leaving the address band in the box. I was livid. This paper was my only connection to the English speaking world while everyone around me spoke rapid-fire French. Later, after I had a chance to calm down, I thought “Hey, there might be a story in this. An American teacher goes to Paris on sabbatical, much like me. Lives on the Left Bank with a routine much like mine. Then one day his newspaper is pilfered, and the thief has the audacity to post a thank-you note for the paper on the bulletin board above the mail box. And she signs it ‘The Phantom Lady of Paris’.” So you see it was a thief who gave me the inspiration for the story.

What an engaging story! So the book was born. Did you bring an excerpt and/or blurb?

Does a teacher ever come to class without his notes? Also, to one lucky commenter today, I’m giving away a copy of my book—paperback or eCopy. Winner’s choice.

A suspense-filled love story, The Phantom Lady of Paris tells of American Paul Lasser and his sojourn to the City of Light, where he meets the mysterious Phantom Lady, Bonnie Silver, a woman who is more question marks than periods. Why is she in Paris and why do French police investigate her and her “persons-of-interest” friends? One friend, a flower child, overdoses on drugs. Another, morphs into a terrorist, bombing cafes. Is a communist agitator an associate of Bonnie’s? Slowly, Paul unearths the answers and while they quench his need to know, they will forever haunt him.

After six hours of writing, I left Café Le Balkan, where I usually wrote, and then strolled down Boulevard Saint Germain on my way to Twenty-One rue Galande. Glancing over my shoulder, I noticed two men walking a stride or so behind me, one to my diagonal left, the other to my diagonal right. At the time, I thought nothing of it, that is, until I slowed and they did the same—at almost the identical instant. I walked faster, so did they. Soon they closed the gap and walked beside me, their shoulders pressing against mine.

The one on my right said, “Monsieur, if you don‘t mind, we‘d like a moment or so of your time.”

“Perhaps we can find a booth inside where we can sit and talk.” Their shoulders nudging mine, they directed me into the café. The taller man gestured toward a booth in the rear and there we sat. Both produced identification cards and badges, indicating they were police investigators. The taller man was Detective Louis Askivour, his partner, Detective Robert Russo.

“Monsieur, we have a few questions,” Detective Askivour said. “And to assist your memory, this should help.” From his coat pocket, he produced a brown envelope containing a little stack of photos.

Detective Askivour looked at the photographs, then at me. “Monsieur, shall we examine these?” He angled the top snapshot so he and I could view it. “We have here a picture of you and Mademoiselle Bonnie Silver entering Gilbert‘s, the stationery and bookstore. I’m sure you recall the occasion. That,” he said, pointing, “is you, the one with his hand on the door handle, right?”

“Yes. And yes, the woman with me is Bonnie Silver.”

He slid the top photo aside, revealing the next. “And in this picture we see you and Mademoiselle Silver exiting Gilbert‘s. The two of you stand near the intersection, beside a young man waving a Soviet flag.”

“Who took these pictures?”

“Irrelevant,” he snapped. “The point is, do you admit that you are the person pictured participating in this anti-government uprising?”

“Anti-government uprising? Don’t you mean pro-education protest? But either way, yes, that’s me, but I wasn’t participating. I was merely observing what was happening around me.”

“He flipped to the next print.  “And this one shows you smiling and seemingly applauding as you gaze at the terrorist and communist agitator François Leguy. François Leguy, that’s his legal name, though, of course, he’s best known here in France as ‘François the Incendiary.’ Is that not you?”

I had hoped to read your book before today, but edits on my own recent sale and edits for another writer held me hostage over the last month. But I can’t wait to read it, especially after this taste! I invite commenters to engage in a conversation now for a chance to win a copy of Calvin’s book! Maybe you have questions about Paris? Then and now? Maybe you’re interested in history and would like to know something of Paris in the 50s? You don’t have to be a writer to ask questions! We’ll announce the winner this evening.

Thank you for this wonderful visit, Calvin. I MUST invite you back soon.