Today I’m excited to introduce you to sister Lyrical Press author, Jessi Gage! Grab your mocha and a sweet treat and gather ’round.

Thank you for having me, today, Calisa. It’s an honor to be a guest at The Ranch.

I’m so excited to share my new release, WISHING FOR A HIGHLANDER, with your readers. It’s out now with Lyrical Press, Inc. I’m a huge fan of time-travel romance and anything with a kilt in it, so really, it was just a matter of time before I wrote my own. And now that I have, I’m worried I might have stumbled upon an addiction. I can’t stop thinking of ideas for sending unsuspecting Scots and modern day women hurtling through time at my whim.

The idea for WISHING FOR A HIGHLANDER started with a kernel of a scene. I imagined a pregnant heroine working late at a museum and opening a package containing an artifact that likes to bring soul mates together. I made the artifact a wishing box and decided it should send the heroine back in time by 500 years into the brawny arms of a Highland warrior.

Of course, he has issues and she has issues, and you’ll have to pick up the book to see what those are ;). But the box knew what it was doing when it send them crashing into each other’s lives, and a happily ever after is guaranteed.

I adore h/h with issues! Lol

While examining Andrew Carnegie’s lucky rosewood box, single-and-pregnant museum worker Melanie makes a tongue in cheek wish on the artifact–for a Highland warrior to help her forget about her cheating ex. Suddenly transported to the middle of a clan skirmish in sixteenth-century Scotland, she realizes she should have been a tad more specific.

Darcy, laird in waiting, should be the most eligible bachelor in Ackergill, but a cruel prank played on him in his teenage years has led him to believe he is too large under his kilt to ever join with a woman. He has committed himself to a life of bachelorhood, running his deceased father’s windmills and keeping up the family manor house…alone.

Darcy’s uncle, Laird Steafan welcomes the strangely dressed woman into his clan, immediately marrying her to Darcy in hopes of an heir. But when Steafan learns of her magic box and brands her a witch, Darcy must do what any good husband would–protect his wife, even if it means forsaking his clan.

WARNING: A pregnant museum worker, a sixteenth-century Scot, and a meddlesome wishing box. 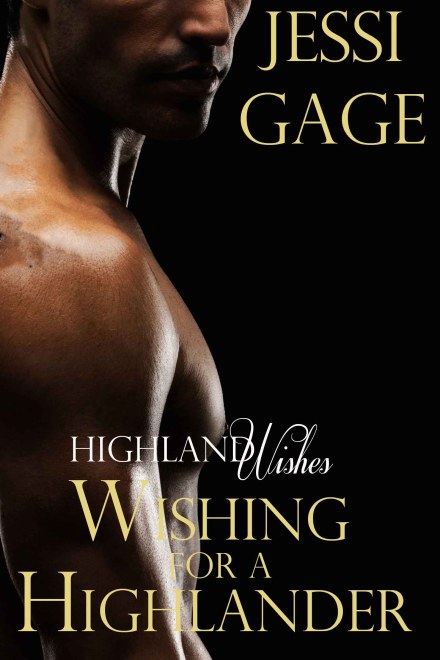 Size might have its advantages when it came to fighting, but those few boons fell far short of making up for the problems it caused. Being the biggest and the strongest had gotten him into far more trouble than it had gotten him out of. Swallowing his regret for how careless he’d been with her, he sought to determine whom she belonged to, whom, saints forbid, he might owe.

“Whose wife are ye, then? Not a Gunn’s or I wouldna have had to rescue you from one.”

“I’m not married,” the lass said. “And thank you for the rescuing, by the way. I can’t believe I dropped the dirk. Stupid.” She shook her head.

His heart warmed at her thanks. He didn’t hear many kind words from the lasses and would take what he could get, even from a dishonored woman who had caught a bairn out wedlock. Oddly, he didn’t think poorly of her. Whether it was her worried brow, her guileless, soft mouth, or her vulnerable size, he had not the heart to condemn her.

He didn’t even mind so much that she found him distasteful for his size, although talking with her now, she didn’t seem overly upset to be in his arms. He endeavored to keep her talking, keep her distracted from her disgust.

“Ye never answered my first question,” he said. “Who are you? And where are ye from if ye’re no’ English?”

“Ugh. I don’t know. Is there an answer that won’t get me burned at the stake or locked up in a ward for the hopelessly insane?”

Like most things out of her mouth, that had been a peculiar answer. “Ye could try the truth,” he offered, slowing his pace since he heard Archie’s voice not far off.

“No,” she said flatly. “I couldn’t. At least not the whole truth. How about we just go with my name, Melanie, and with the honest fact that I’m a long way from home and I have no idea how to get back.” Her green eyes pierced his. “I’m afraid you might be stuck with me, Darcy Keith.”

Jessi lives with her husband and children in the Seattle area. In addition to writing paranormal romance, she’s a wife, a mom, an audiologist, a church-goer, a Ford driver, a PC user, and a coffee snob. Her guiding tenet in her writing is that good triumphs over evil, but not before evil gives good one heck of a run for its money. The last time she imagined a world without romance novels, her husband found her crouched in the corner, rocking.

If anyone would like more information about WISHING FOR A HIGHLANDER or my other works, they are more than welcome to swing by my blog or website.

This week, I’m giving away 2 ecopies of WISHING FOR A HIGHLANDER. To enter the drawing, commenters here at The Ranch should (1) leave their email address and (2) answer the following question: If you could go back in time for one week of what-happens-in-the-past-stays-in-the-past fantasy, where & when would you go?

My answer: I’d go back to Aberdeen, WA in 1991 just before Nirvana broke out with their big hit “Smells Like Teen Spirit” and flirt my butt off with Kurt Cobain.

Aw- love those accents! My answer- I would have to go back to when cowboys and Indians roamed the west. Where? Probably Texas to get me a big ol’ cowboy. Everything’s bigger there, right? 😉

For more chances at a free ecopy of WISHING FOR A HIGHLANDER ranchers can swing by my blog and comment over there. I’ll do the drawing on Friday 1/11/13 at midnight and notify the winners by email on Saturday 1/12/13.

Thanks again for having me, Calisa! Happy trails!

WISHING FOR A HIGHLANDER buy links:

Lyrical (50% off for the month of January)

Thanks for joining me today, Jessi. Good luck with your career !