I’m handing the Ranch reins over today to friend and sister Wild Rose Press author Andrea Downing to share a little about RNC convention, founded by the awesome cover model, Jimmy Thomas, in Las Vegas and two of her awesome books. Let’s settle in and hear what she has to tell us!

It’s all yours, Andi!

I never wanted to go to Vegas.  Not only was it NOT on my ‘places I’d like to visit’ list but it was actually at the very top of my ‘places I never want to get caught dead in’ list.  Okay, so if someone offered me a free ticket to meet Tim McGraw backstage and sit in the front row of his show in Vegas I might’ve accepted.  Or possibly a front row seat to the Professional Rodeo or Bull Riders’ Finals.  But Vegas as in Las Vegas—no!  My last trip to Nevada was to go to a working cattle ranch 70 miles from the nearest town and 40 miles up a dirt road.  That’s me.  Not Vegas.  Sin City sits like a scar on the desert landscape, mountains draped in the background against an endless blue sky.  It is a concrete mass of high rise hotels, multi-story parking lots and neon, like a misplaced scapulae on the back of Nevada. So, what finally got me there?  My historical western romance, Loveland, was nominated for Best American Historical at the RONE Awards, to be given out by InD’Tale Magazine at the Romance Novel Convention.   And as my daughter pointed out, if I won, I’d be sorry not to be there.

I made contact with two fellow authors, Babette James and Rolynn Anderson, and I was off.  Unfortunately for them, I knew ahead my neuroses about Sin City were going to drive them nuts, but then, it was only 4 nights and they’d survive.  But would I? Even before you leave the airport, one-armed bandits are aiming to take your money.  The long haul to baggage claim (purposefully designed to scoot you past this slot machine line-up?) meant I made the first of numerous phone calls to Babette to keep her informed of my progress.  Whether or not she cared, I never discovered, but eventually we met for dinner and a much-needed bottle of wine.

The hotel was a world in itself.  Two thousand four hundred rooms means there are a lot of people around, a lot of shops, and a helluva lot of gambling.  Okay, so I’m from New York but I never choose hotels with more than about 100 rooms, and this place had endless noise, lights and…a shark tank?  Yup, right in the middle of the hotel was the pool area with a shark tank, along with a water slide so you could…Well, you get the picture.  And outside?  Outside was Fremont St. with a continuing light show, strippers and more noise and flashing lights. 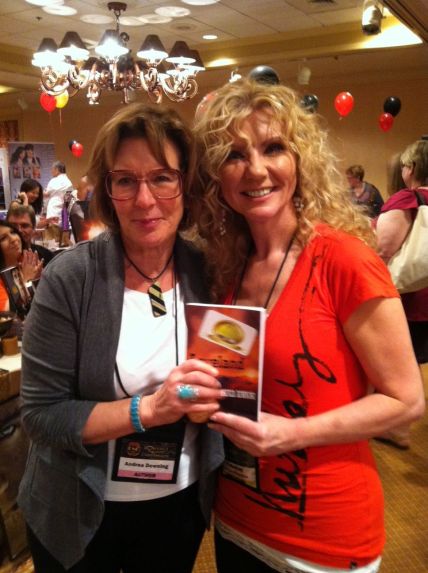 So, was this convention in Vegas worth attending?  Well, let me say straight away that LOVELAND  did not win the RONE but then, I sort of knew that beforehand.  I had read the winning book and thought it was wonderful, so I certainly didn’t mind, and the honor of being a finalist kept me happy.  Of the sessions I attended, I took copious notes in one, a fair amount of notes in another, sat through a third and walked out of a fourth, while a fifth just left me speechless.  I enjoyed meeting T.J. MacKay, Editor of InD’Tale Magazine, and her staff.  I had some really great meals in restaurants I just managed to somehow find in the melee, along with Babette and Rolynn.  I sold a couple of books at the Book Fair on the Saturday, and had a fun time out on Fremont St. with the girls.  But best of all was just being with fellow authors, getting to know the faces behind the emails, meeting with people who know exactly what you go through each and every day.  Thanks, ladies, you’re the best!

And, oh yes!!  I got home in one piece, fifteen dollars richer.

That’s sounds like an awesome experience, Andi! Where can readers find you now that you’re back home?

And now about those books?

When Lady Alexandra Calthorpe returns to the Loveland, Colorado, ranch owned by her father, the Duke, she has little idea of how the experience will alter her future. Headstrong and willful, Alex tries to overcome a disastrous marriage in England and be free of the strictures of Victorian society –and become independent of men. That is, until Jesse Makepeace saunters back into her life…

Hot-tempered and hot-blooded cowpuncher Jesse Makepeace can’t seem to accept that the child he once knew is now the ravishing yet determined woman before him. Fighting rustlers proves a whole lot easier than fighting Alex when he’s got to keep more than his temper under control.

Arguments abound as Alex pursues her career as an artist and Jesse faces the prejudice of the English social order. The question is, will Loveland live up to its name?

Lacey Everhart has carved out a tough existence in the wilds of 1880s Wyoming, working hard to build a secure life for herself and her younger brother, Luke. She will stop at nothing to protect what’s hers and keep them safe. Even if it means keeping a secret that could destroy their lives.

Marshal Dylan J. Kane is a man who considers everything as black and white, right or wrong. He’s never seen life any other way until he sets eyes on Lacey. Suddenly the straight and narrow that he’s followed has a few twists and turns. Loving Lacey offers the home life for which he hankers…but can he really love a woman who seems to be plain lawless?

Thanks for sharing, Andi! How fun to get to meet other WRP authors! And it looks like you all had a great time.