D ~ Blogging from A to Z ~ D is for #Dogs: Those adorable furbabies #BloggingAtoZ #MFRWAuthor [MI]

Welcome to the round pen where I’ll blog every day in April– except Sundays– through every letter in the alphabet. I’ll be talking about a variety of things all month long. Each day the post will be about something beginning with the corresponding alphabet letter.  It might be writing related, or you might learn something new about me. You can find all the 2200+ bloggers and authors who are filling your April with interesting and fun posts by clicking the nifty custom banner up^there. 😉

Dogs are so important to us. Mr. Rhose and I have four, and our granddaughter has one that lives with her (us), also.

Cocoa’s my baby. When I had my new debit/credit card personalized I had my little girl’s picture put on it. She doesn’t play with toys often, but she had a yellow squeaky fish she would fight hubby’s dog for. He ‘killed’ her fish last fall and broke Cocoa’s heart. I got her a new squeaky toy, a blue squirrel, and she has no use for it. LOL She’s my little purebred chihuahua, registered and papered. 🙂 She’s had exactly one puppy, we named Diamond Rio, who is now the constant companion to a wheelchair-bound woman whom I gifted him to when he was a few months old. I would like to get another puppy from her, but she’s too old and I worried about her health-being so small- even when she was younger. 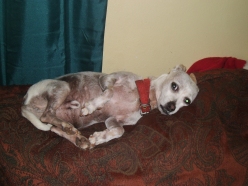 Spike: I will sleep in any position.

Spike is Mr. Rhose’s ‘Chucky’. His little chihuahua buddy. I got him for hubby so he wouldn’t feel so terribly outnumbered in a house of all females. Believe it or not, Spike’s parents are no bigger than my five pound Cocoa. He just didn’t stop growing. (I think it has something to do with all the people food hubby fed him.

) To say Spike is spoiled would be a gross understatement. He and Cocoa both sleep with us. We’ve tried to move them to their cushy beds on the floor but they won’t be treated like common dogs. In fact, when Spike gets in real trouble hubby calls him a ‘d-o-g’ and he will pout for hours. He’s a character. He loves hunting gophers, helped hubby put in a complete yard sprinkler system when he was very young and thinks all cows are out to get him. Like most small dogs, he doesn’t know he’s little. He keeps us smiling. 😀 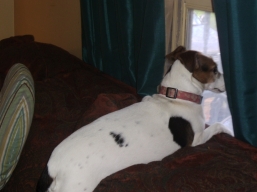 Molly: Is Daddy home yet!?

Molly is a Jack Russell. Our friend who gave her to us is Swedish and needed to be able to travel freely to visit her aging father in Sweden. With Molly that was difficult because Molly is not a people ‘person’ and couldn’t be left with just anybody. When our friend saw how quickly Molly and I bonded she asked if we wanted her. But it’s too expensive to fly a dog. Not a problem, our friend paid all her expenses to Oklahoma. She wouldn’t leave my side. 🙂 But over the last three years Molly has slowly migrated to become hubby’s dog. She lives “up his butt” not to sound gross, but… I just don’t seem to exist unless I have a treat for her. LOL

Lucy is our little rescue girl. Mr. Rhose was remodeling an old apartment building and there was no heat installed yet, in January. One of the workers had been leaving her to freeze in the building, unbeknownst to hubby, with no food or water all night and letting her run the streets by day. Two years ago hubby brought her home so we could get her healthy and find her a good home, and now she’s a permanent fixture in the family. LOL It’s still very obvious Lucy had been badly abused. She still has trust issues and going bye-bye terrifies her, so we take her on rides to help her learn to trust that when she leaves, she WILL come back home. She plays in the silliest ways now, running in circles like a bullet, attacking our feet, barking at me for sticking my tongue out at her– but these activities, too, took a year and more to get out of her. She sleeps in her bed on the floor and is very possessive of her space, and is so very camera shy. Seriously, she refuses to look at the camera. 😆 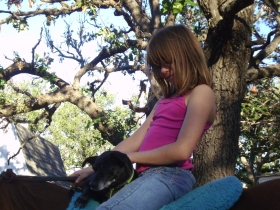 Then, as I mentioned, there’s Andee’s little old chihuahua/dachshund mix, Jetta. She’s had her since she was a baby and they are inseparable, and the same age give or take a few months. 🙂 This sweetie lives to please her mistress. Even if that means riding a huge horse like Sonny.

Yes, in our house

is for dogs. Those furbabies we love like children.

Tune in tomorrow for the letter E, and thanks for stopping by today. 🙂

*For those new to the Ranch and curious about my greetings, ‘osiyo’ means hello and dodadagohvi means until we meet again, in Cherokee, of which I am proudly 1/4 but embrace 100%.