Survival Knitting: How an earthquake inspired a book.
In 2009, an Italian woman, trapped underneath her bed after an earthquake, kept herself occupied by knitting. Author Erin Fanning read about the incident around the same time she was learning how to knit. She imagined firefighters digging through the rubble and finding the woman wrapped in a knitted afghan.
The story tumbled around in Erin’s brain, somehow intersecting with her interest in Mexican culture. From there, she discovered the Mayan twin myth and the battle with the demon Vucub Caquix. Bits and pieces of Mayan mythology adhered themselves to her imagination, morphing into a history of magic and needlework.
Soon characters formed, along with a question: what if you could not only knit your way to safety but also create a disaster through knitting? It wasn’t long afterward that Blood Stitches pushed its way through her fingertips.

It’s called El Toque de la Luna—The Touch of the Moon. At least that’s how nineteen-year-old Gabby’s older sister, Esperanza, refers to the magical powers she inherited from their Mayan ancestors. Esperanza says women with El Toque weave magic into their knitting, creating tapestries capable of saving—or devastating—the world. Gabby thinks Esperanza is more like touched in the head—until a man dressed like a candy corn arrives at their Seattle home on Halloween. But “Mr. C” is far from sweet…

Soon, Gabby and her almost-more-than-friend, Frank, find themselves spirited away to a demon ball, complete with shape shifters—and on a mission to destroy Esperanza’s tapestries before they cause an apocalyptic disaster… And before it’s too late to confess their true feelings for each other. 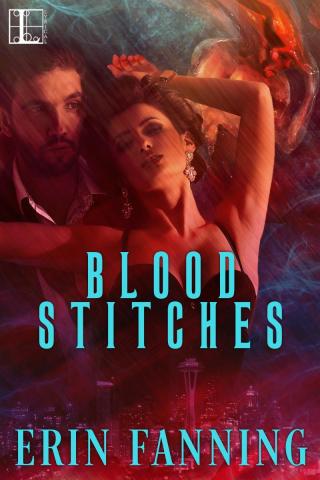 A gust of wind scattered leaves across the University of Seattle campus. My hair tangled over my face. New contacts tortured my eyes, and books weighed down my backpack. It didn’t matter. A tornado could have snatched me up. As long as it carried me home and put an end to the anniversary of the worst day of my life.

“Watch out, Gabby.” My best friend Frank thrust his hands deep into the pockets of his pinstriped suit. “We’re being followed by a giant candy corn.”

“Giant candy corn? Yeah, right.” If I turned around, Frank would laugh and say, “Gotcha”, or some other dorky thing. The mind-numbing boredom of Calculus I, our last class of the day, always set Frank off, making him zanier than usual.

“I mean it. We’ve got a candy corn on our tail.” Frank whistled a Lester Ruben song as he sauntered ahead.

“Okay, okay. Let me see this Halloween wonder.” If I didn’t give in, Frank would never leave me alone. I whirled, ready to hear Frank’s laugh, and almost ran into a man. His face glowed orange, like someone who’d spent too much time in a tanning booth, and he wore a white cap pulled down to his ears. A yellow scarf hid his neck and chin. For once, Frank wasn’t kidding. The man resembled a giant candy corn.

Shredded paper and a postage stamp poked out of his scarf, and a moon decorated an edge of the knitting, like one of my older sister Esperanza’s creations. It didn’t seem possible, but no one else I knew added garbage and a signature moon to their knitting. A wool coat covered the rest of him, except his face and steel-tipped boots.

Frank’s chuckles mixed with squirrels chattering in a nearby tree. Drizzle moistened my forehead, and a cold dampness seeped into my bones. Everything seemed to happen in slow motion, like watching Esperanza unravel her knitting one stitch at a time to fix a mistake. 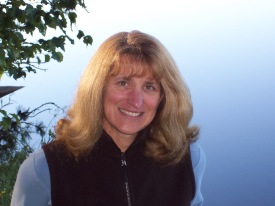 Erin Fanning spends her summers on a northern Michigan lake, where her imagination explores the water and dense forest for undiscovered creatures. In the winter, she migrates to central Idaho, exchanging mountain bikes and kayaks for skis and snowshoes. She’s the author of Mountain Biking Michigan, as well as numerous articles, essays, and short stories.