It’s just like movie night (or day), so grab a bag or tub of popcorn and a soda and settle in a comfy seat for some great banners and videos by some great authors. I’m honored to share awesome and superbly done book banners each month here on the Ranch! It’s only the best for my guests!

Because of a family emergency earlier this month I’m running two weeks behind, so I hope you’ll appreciate both banners and videos this week so you don’t miss out on anything. Enjoy!

Would you like to see your book and author banners here? Go to the link below and follow the instructions and I’ll post your (non-erotica only) banners, covers and videos on the Ranch! I’d love if you spread the word to help this promotional offer grow and thrive!

Posted in inspirations, Pen of the Dreamer, Promotion, UnCover Mondays

UnCover Mondays on The Ranch!!! This feature is only to highlight authors–not to sell books (though if you see one you want to buy I’m sure the authors won’t mind  ). Enjoy this weeks’ covers to ogle and explore. If there is one provided, you can follow the artist links by clicking each book cover that has an artist linked to learn more about the amazing creators of these beautiful covers. I think they deserve fair mention since they helped create the book! As always, click the author website links to find out more about them. Be sure to return on alternate Mondays for some amazing banners and video trailers by authors!

Title:  Be Still My Lover’s Heart

Ethereal beauty Shea, a Lieutenant in a Universal military, has spent the last four years protecting Colony supply freighters on a small space station. If not for her partner and the hopes of a better assignment, the loss of her husband and a devastating illness would leave her little desire to live.  That is until she meets Tempest, an alien whose species is rumored to be the origin of the vampires, a man who makes her feel alive in ways she’s never felt before. Tempest has prayed to the Divine One for countless years for his bondmate.  Shea is his long-awaited answer and so much more.  One night will not be enough for a man who has waited a lifetime, but he is determined to make Shea his forever. With a madman out to destroy them and certain death nipping at their heels, will Tempest and Shea outwit Remi and survive to share a future together, or die protecting all they hold dear?

Orphaned young, Kathleen Barns has struggled to survive only to end up in a New York mill, when an unexpected inheritance gives her a glimpse of freedom. But becoming the landowner of a coveted piece of land with precious water rights in New Mexico Territory threatens to destroy her only chance at love. Forced into a marriage to a man who believes she planned the shotgun wedding to gain control of his ranch, Kathleen flees into the wilderness. Yet it is her unwanted husband that keeps saving her life and threatens to steal her heart. Mike Baca had finally reached his goal, his fighting days were far behind him now that the war was over, he owned a ranch and he was on his way home to marry the richest girl in the New Mexico Territory. A shotgun in his back had him married to a green-eyed girl who wanted his ranch! Furious with her trickery, Mike made sure she wouldn’t want to keep him. It was only after she had run, with her big-eyed gaze haunting him that he discovered she was innocent, and there was a plot on her life. Now he must race the clock and the wild badlands to try and save his wife – and convince her to stay.

After her grandfather’s death, mounting debts force Annie Crawford to sell her inheritance to uphold her family’s honor and avoid bankruptcy. Financial stability comes with an even higher price: her heritage. She must rebuild her legacy from nothing.

Purchasing Annie’s property means three things to Luke Maxwell: financial burden on Maxwell Development, opportunity to propel his career to the top by developing the old ghost town, and, ultimately, approval to take over his father’s company. All of which take precedence over his attraction to the pretty seller.

While touring the property, Annie and Luke are whisked back in time to the 1891 mining community. Together, they endure antiquated hardships and turn to each other for familiarity. Comfort soon becomes passion. As they face a lifetime in the wrong century, Annie and Luke discover a predestined responsibility to the future. Can the love they’ve propagated in the past take root in the present?

One dead body is frightening enough, but a second one, plus a dirty cop, sends chef Mikela Richards fleeing for her life. The ultimate city girl finds a safe hiding place on a Wyoming Dude ranch, where she tries to discover if the murders are connected to the mysterious computer memory stick she found in her car. But her fragile feeling of safety is disturbed by a compelling Marine, home on leave.

Back from Afghanistan to heal both physically and emotionally, Shawn Saunders recognizes the type of fear in Mikela’s eyes—it’s one of the things he’s come home to forget. Even though he knows it’s a bad idea, he can’t stop himself from trying to help her, while she’s even more afraid of letting him. In spite of their reservations, neither can resist the pull of their attraction.

Vivien Howard hasn’t forgiven Weston Holmes for almost derailing her career five years ago. Female directors in 1930s Hollywood are few and far between, and a man who coasts by on his good looks and family connections can’t possibly appreciate what it took for her to get to where she is. But when the studio head puts Weston in charge of overseeing Vivien’s ambitious Civil War film, she realizes she has a choice: make nice with her charismatic new boss or watch a replacement director destroy her dream.

Weston Holmes doesn’t know much about making movies, but he knows plenty about money. And thanks to the Depression, ticket sales are dangerously low. The studio can’t afford a flop—or bad press, which is exactly what threatens to unfold when an innocent encounter between Weston and Vivien is misconstrued by the gossip rags. The only solution? A marriage of convenience that will force the bickering duo into an unlikely alliance—and guide them to their own happy Hollywood ending.

Title: Take a Chance on Love

When Chancie de Leur meets highway patrol trooper Micah Taylor one frosty Wyoming night, instant sexual heat kindles between them. Chancie’s a lonely young widow who owns her own business and Micah is divorced, so there shouldn’t be anything holding them back. But Micah wonders if Chancie’s obvious wealth might become an issue, or the fact that she’s apparently the second woman in his life who has zero interest in ever having his baby.

Micah has no idea of the real problem between him and Chancie, until he meets her son. Ten-year-old Jamie de Leur is determined to break up his mom and her lawman, and Micah questions whether any relationship with Chancie is worth dealing with the spoiled kid she’s raising.

In a showdown over Jamie breaking the law, Micah has to decide if he wants to be Chancie’s cop—or her family man.

A ranger with unfinished business…

Cord McCrea was the Texas Ranger of Kate’s dreams…but their life together ended like a nightmare. They were too proud and stubborn, and there was no repairing the damage done to their family. All Kate Danver McCrea has now is the reminder he’d left growing inside her.

The crazed gangster who shattered Cord’s life is a free man, and he wants to settle old scores. Cord will do anything to protect his ex-wife, but once she’s safe, they’ll go their separate ways again. Only, the baby changes everything. If they could survive the perils of a West Texas winter while outmaneuvering danger at every pass, they might have a second chance. Because with a traitor in their midst, they have no one to trust–except each other. 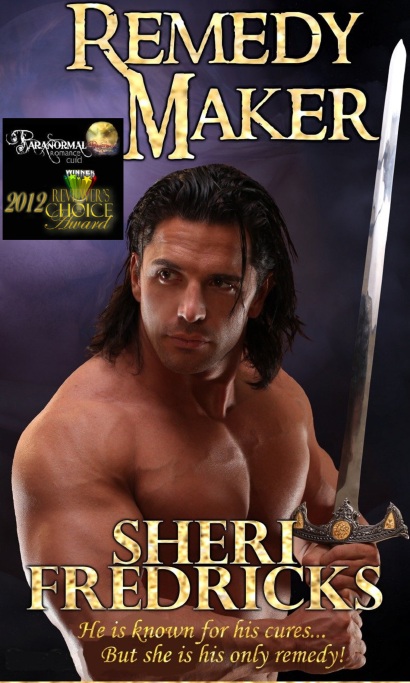 Man by day, Centaur by night, Rhycious is a remedy maker who needs his own healing.

He’s the royal physician, famous for his cures. War and posttraumatic stress disorder has broken his spirit, preventing him from finding true happiness. Then a direct order from the queen to investigate an uprising forces him out of his secluded cabin at the edge of the forest.

Patience is an optimistic, good-natured Wood Nymph who works as a mediator to ensure harmony within the Nymph sector.

Environmental pollution in the aquifer stream that feeds the taproot tree of her heart is slowly killing her. Resigned to the fact she will not live long, she sets out to discover the mysterious disappearance of her sister. Experience has taught her to deny herself the love of a male, but the gruff Centaur is different. He doesn’t push his expectations on her, only his healing nature.

When Rhycious loses his grip on reality, he believes his inability to control his disorder will drive Patience away. Nevertheless, desire flares, and Patience draws him close. Kidnapping and betrayal turn their mythic joint venture into a deadly bout.

Will their love endure when survival hinges on trusting each other?

Pen was a Guardian, but one violent night took his wings. Ten years later he is given the opportunity to earn them back.

Jade is spellbound by the new student. Pen is quiet, but she is determined to learn more about him. When her terrifying past comes back to haunt her, Pen reveals there is much more to him than she could have ever imagined.